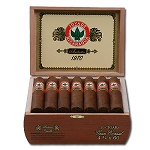 Joya de Nicaragua was developed in Nicaragua's first cigar factory which was founded in 1964. This brand has even been appreciated by many US Presidents for its highly renowned rich full bodied flavor. However, due to Communist rule and decades of war, the brand had been destroyed and the factory decimated along with most of the country.

Years later, with the country back on the rise, as well as is the Joya de Nicaragua brand, new opportunities are just being realized. The rebirth of Joya de Nicaragua Antaño 1970, as it is now called, was repackaged to celebrate the rich heritage and worldwide renowned prestige it once enjoyed in the 1970s, which surely marks a return to days of cigar glory. This robust and full-bodied beauty is simply delicious not to mention earning a 91% overall rating (Cigar Insider).

Since its return, the Antaño 1970 has been named one of Aficionado's Top 50 Cigars. In addition to several 90+ point scores, it received an overall and well-deserved 91% score with a plump Figurado that performs well it's result. It's medium to full bodied with earthy flavors and floral spicy hints.

10 years after the reintroduction of the landmark Joya de Nicaragua blend, a new Dark Corojo introduces a new and unique welcoming twist on Nicaragua's classic cigar. Produced with 3-year aged Nicaraguan tobaccos and long-fillers with a special Corojo dark, oily leaf wrapper that's loaded with flavor. Naturally robust yet smooth, this new dark blend is always a welcome treat. The JdN Dark Corojo also emanates an aroma from a rich variety of flavors such as pepper, cocoa, cedar with a slightly sweet finish. Not just any blend is worthy of the Joya de Nicaragua name.